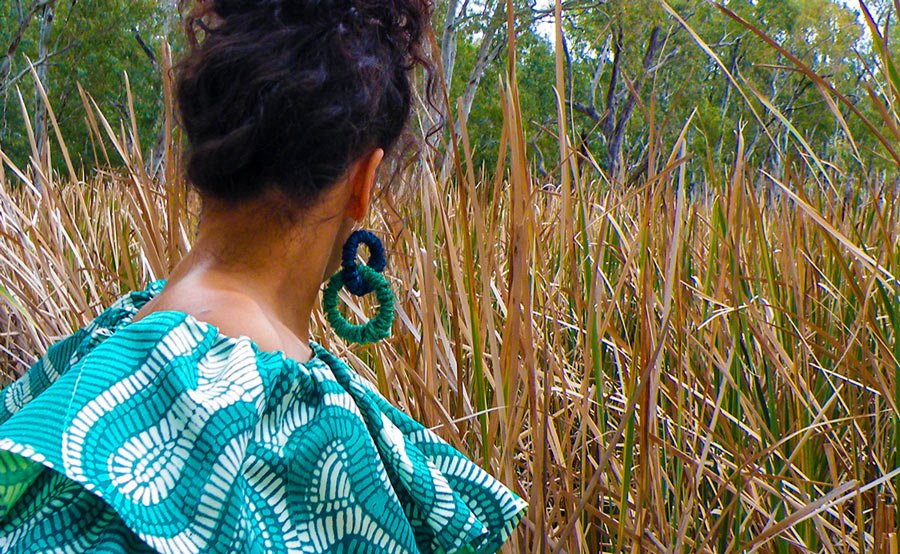 by Nina Fitzgerald and Ellie Meyer

In the lead up to the inaugural NIFA, we’ll be delving into each of the six award categories, and introducing you to some of the unique talent of Australia’s leading First Nations designers, creatives  and artists! First up, the Cultural Adornment and Wearable Art Award, celebrating worn items that are created as fine or expressive art, used to define or express culture.

As old as time.

Cultural adornment and wearable art goes deeper than just the decorative, it is a visual vocabulary, enriched with cultural expression. A medium through which old becomes new, as tradition meets contemporary.

This year’s panel of judges will be considering each nominee based on; design quality and originality, artistic merit, cultural advancement and expression, quality of construction, environmental and social contribution, wearability and/or performance potential.

“Cultural adornment and wearable art showcases thousands of years of Aboriginal culture, ceremony and song, that has been documented in many forms of creative expression, whether it be on bodies, the sand, bark, or weaving, for example. Excitingly, it is a form of cultural expression that is becoming more accessible as it is transposed through new contemporary mediums. If people truly engage with wearable art they can actually further their knowledge about the rich stories behind the piece and what they mean.”

The prize for this category includes a DAAFF sponsored cash prize of $5,000, the opportunity to build a collection for Country to Couture 2020, and an editorial story with a major Australian art magazine. 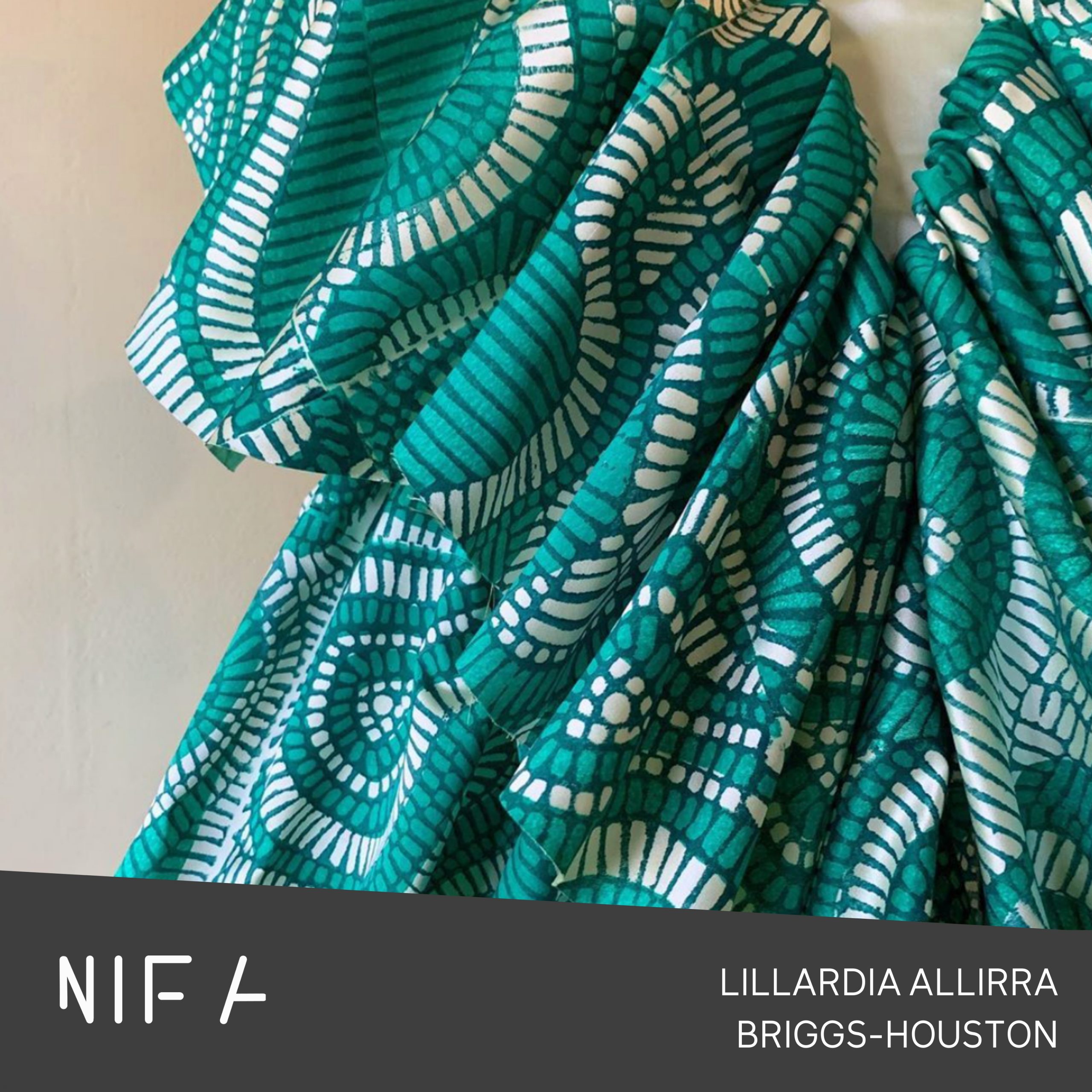 Lillardia Allirra Briggs-Houston is a Wiradjuri Yorta Yorta Gangulu woman. She creates all her own, including artworks, hand printed fabrics and garments, on her maternal grandmother’s country in Narrandera. Her entry to the inaugural NIFA tells the story of the Sandhills in Narrandera, where her grandmother was raised and where she grew up when she was in the care of her grandmother as a young child. 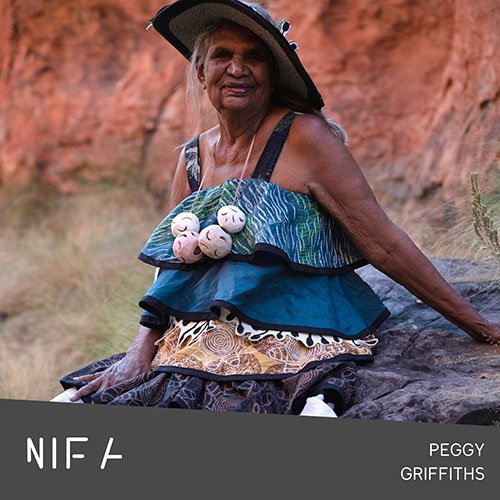 Peggy Griffiths, a senior artist, cultural leader and Board Director at Waringarri Arts, was key in initiating textiles as a new medium at the centre in 2016. Her cultural leadership and knowledge sharing is fundamental to the Art Centre, as is her support and mentorship of younger artists in expressing their culture. The Legacy Dress represents all of Griffiths’ granddaughters, with each layer of linen or cotton hand-block printed by one of them, using their own motifs.  Griffith’s great pride in what her granddaughters have achieved as artists sparked the design of this dress.
www.waringarriarts.com.au | @waringarri_arts 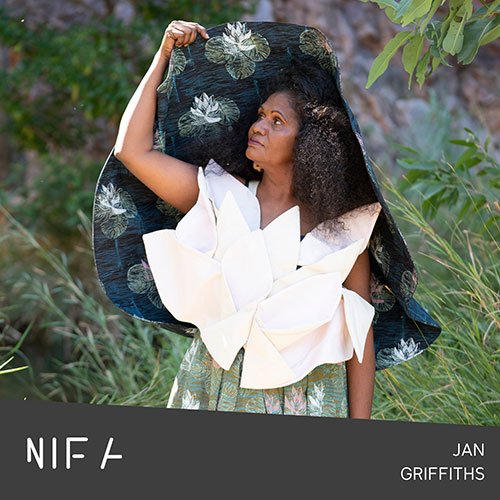 Jan Griffiths, a talented painter, ceramic artist and writer, this personal narrative-based artwork concerns Jan’s grandmother’s escape from a station owner, by hiding in a billabong filled with water lilies. “My grandmother first saw a gardiya (white man) there and she ran and hid in the billabong. Scared and frightened she stayed very quiet until the station manager and tracker were out of sight.”

Concerned with sustaining and promoting cultural knowledge, Jan states “ If we don’t carry on these stories… we will forget where we came from.”

Debra Beale is a Sydney-based artist and designer maker, from the Palawa/Yorta Yorta and Gamilaraay/Wonnarua Nation. Designed with quality and originality, her pieces tell a narrative of her Aboriginal cultural practices, focusing on cultural heritage, family and community. Her artwork is a combination of Womens Business, which acknowledges the past whilst moving forward to the future. Her jewellery is made with a strong connection to country and the importance of looking after people and the environment. Her jewellery has been used in fashion runways, presentations, programs and collaborative workshops.
www.boomalli.com.au | @debrabealeoriginal 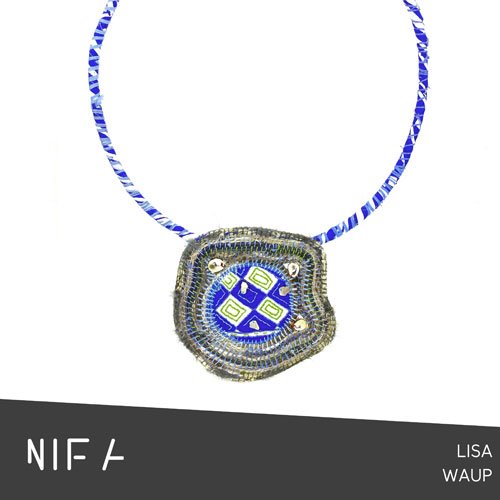 Lisa Waup is an award winning Gunditjmara and Torres Strait Islander artist, who sees her connection to nature and her culture as one and the same. There is a rich narrative to Lisa’s work and she successfully uses symbolism to contribute to a wider conversation of cultural advancement and expression. Lisa’s highly original work intersects her ancestral connections with contemporary elements of sustainable design, with an eclectic use of repurposed materials that express the layers of identity and stories reclaimed. Her ability to connect her art practice and fashion projects is a powerful representation of how Indigenous culture and fashion can successfully converge in a contemporary setting.

This year’s winner will be announced during the inaugural National Indigenous Fashion Awards (aka NIFA), and broadcast LIVE through the NITV social channels on 5 August!

Stay up to date

Enter your details and we will send you Indigenous Fashion Projects news and updates.